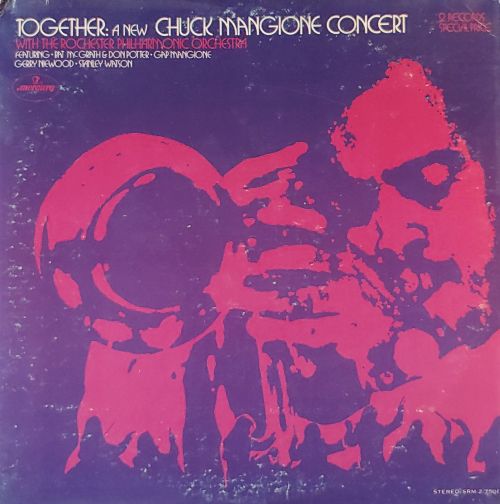 ​As far as I'm concerned, Chuck Mangione is nothing short of fantastic - as a musician and as a person.  I'd heard about him before I met him 10 years ago at the Eastman School of Music in Rochester.  I had heard stories of how great he was and I'd loved his Jazz Brothers album which he'd done with his brother Gap.  Bill Motzing, now the sound man for Blood, Sweat and Tears, has told me that at 15 Chuck was playing like a full grown adult - that was it!  He was so mature in his ways.  At age 15, Chuck sat in with Dizzy Gillespie and he was so impressed that he gave Chuck a trumpet.

Chuck's always been a leader.  He had the great ability to get the best out of musicians.  Like we had a dance band for a few years while I was at Eastman and Chuck was the conductor.  Now most of those guys were classical musicians who'd never been into Swing in their lives - Chuck got them to swing like crazy!  He's a master at rehearsal psychology.

It was in that dance band that I learned a lot from Chuck.  As a matter of fact, Chuck was a major influence on my musical life and style.

Since those days, I've performed with Chuck on many occasions and he's improved with age.  We did "Feel Of A Vision" (which was on Chuck's last Mercury album "Friends And Love") - which was written as my graduation recital - with the New World Symphony at New York's Philharmonic Hall.  We did "Feel Of A Vision" and "Fire Watchers" at a concert Chuck wrote, put together, and promoted a couple of years ago in Rochester and we've worked together at other times, and we will again.  I'd perform with him for the rest of my life if it was possible.  Each time we've worked together, it's been one of the most thoroughly satisfying experiences of my life.

In my opinion, Chuck will be one of the most sought after people in the music business very shortly.  A man who was as mature as Chuck at age 15 and with what he's doing now - 10 years from now is something to really look forward to.