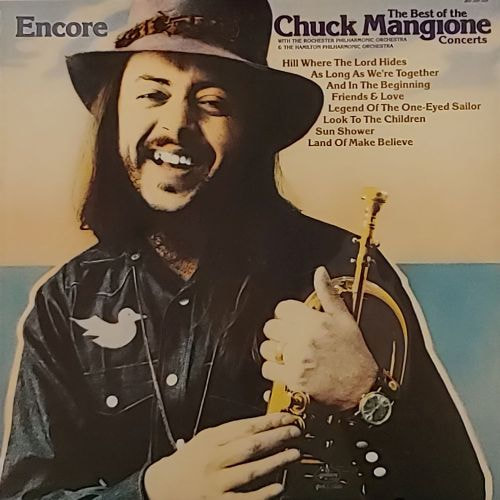 The following orchestras vary from track to track

​It has been a strange five years for Chuck Mangione. He was a teacher of improvisation at the Eastman School of Music and head of the Jazz Ensemble there. In 1969 he put together a concert with the Rochester Philharmonic which was so successful they got together a year later, this time at the invitation of the Orchestra.

It was recorded and "Friends and Love" was released nationally by Mercury Records. The album sold beyond anyone's expectations and actually spawned a hit single called "Hill Where The Lord Hides" which hit number one in Dallas, three in Seattle and top 10 in many cities across the nation.

It didn't all come from sitting around home town Rochester hoping for good things to happen. Chuck had already tried out one career by the time he conquered Eastman. "I went on the road for a while with Art Blakey and worked around New York with Kai Winding and Maynard Ferguson, but I got all that out of my blood and returned home to Rochester, married and had a couple of kids." Obviously it wasn't completely out of his blood. Chuck still seems to constantly tour with his Quartet and orchestras are a big part of his presentation when it can be done. "Hiring 50
musicians etc. gets very expensive." It probably cost a fortune to get together with The Rochester Philharmonic and later the Hamilton Philharmonic, but that expense gave us a more important treasure—Mangione's music.

"Encore ..." not only brings us the music that got Mangione on his way, it brings you what many people consider his best.