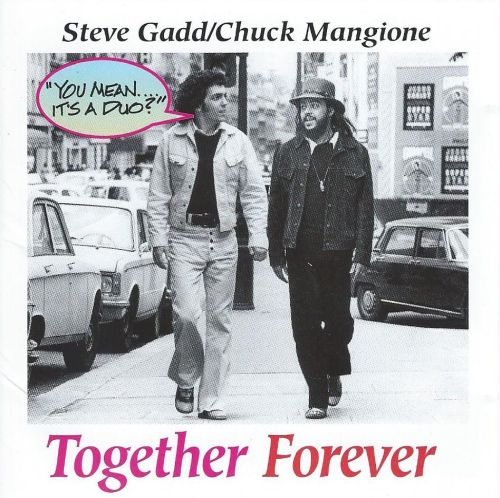 ​​Last November Steve Gadd and Chuck Mangione reserved the month of March, 1994 to co-produce "The Hat's Back" album - (Chuck's first in several years).

They began to weave this project into their already hectic schedules. The holidays, family responsibilities and two diverse performing itineraries somehow allowed sufficient time to select material and develop a feel for the music.

At Steve's suggestion, they went into the studio one February night to layout a musical road map of the new material. The plan was to record Chuck's acoustic piano and Steve's drums first and then lay Chuck's flugelhorn / trumpet part on top of this.

After waiting a couple hours for some technical difficulties to be ironed out, Larry Swist turned "The Machine" on and miraculously Together Forever was born.

Between midnight and 5:00am DizzyMiles (Hat's Back version), Tears In Heaven, Aldovio, I've Got a Crush, Santa Nimpha, Dove Talk, and Slo Ro were recorded in their entirety and appear on this album exactly as they were performed that night.

In fact, these tracks became the foundation of The Hat's Back album with horns, strings, guitars, bass, keyboards, vocals, etc. added to the original tracks.

Together Forever and DizzyMiles were recorded during the March sessions.

Chuck Mangione: "Steve Gadd is the reason the hat's back. My thanks to the human click track. Let's do it some more." P.S. Hold the Mustard!

Steve Gadd: "I'm glad Chuck's back and honored to be part of his new creation. Here's to many more years of music together." P.S. I'm glad we survived!