An Evening of Magic 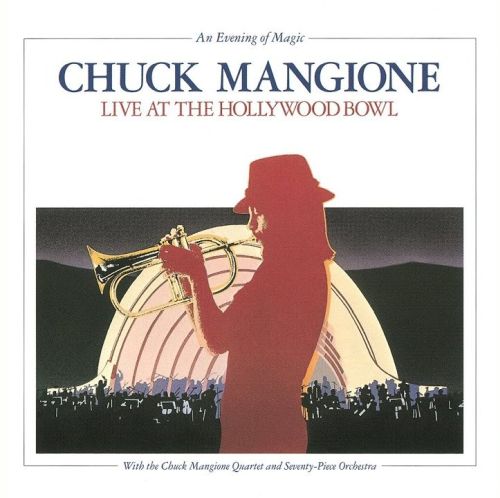 Fears of rain-out gone. Blazing sun fills the bowl. Fears of heat exhaustion set in. Recording 70 musicians very complex. Even more so outdoors in unique pace like Bowl - capacity of 18,000 with the last row an eighth-mile from stage. Problems mount. Baffles around quartet make it difficult for Chuck to hear strings. Sun melts orchestra. Amp blows up. Piano overheats. Horn valves stick. Musicians sweat it out. 1 p.m. - Under shades and umbrellas final 3 hour rehearsal comes to an end - feels like 200 degrees onstage - actually only near 100. Royal insanity. Never enough time to run through all musical material - even once.

TRAFFIC IS INCREDIBLE. By 4 p.m. bumper-to-bumper for next three hours. People looking for spaces everywhere. Chuck and quartet stay at nearby hotel to avoid missing concert. 18,000 fans arrive in cars, buses, trucks, on bicycles, on foot with picnic baskets of every description. Food. Drink. Elaborate spreads. Feasts for a Sunday afternoon.

Concert billing: "Chuck Mangione Feels So Good at the Hollywood Bowl." Hottest ticket in town. Everybody buzzing about this one. Concert sold out for weeks. 5:30 p.m. - Temperature drops to cool 75 degrees. Backstage, Chuck's personal goals: play great concert for 18,000 people; West Coast premiere of "Children of Sanchez" music: chance to record his music "live" with 70 musicians. Recording this concert for a live album, a "one take" situation - not several performances to choose from. 7 p.m. - unusually early starting time because of large amount of music to be played - concert begins in broad daylight. Chuck appears on stage with no spotlight and no announcement as 15,000 of expected 18,000 already seated - other 3,000 come in during opening numbers. From first note of "Feels So Good" Chuck remembers "a sea of moving people."

By third tune, "Chase the Clouds Away" everyone has arrived as the majesty of Mangione's music sets in. Chuck leads the way. The quartet floats. The orchestra soars. The excitement rages. The night falls. And in the darkness it becomes clear: Mangione's music transforms reality into fantasy. His melodies exude warmth and compassion. And along with his soulful flugelhorn and keyboard, several things make this night very special. The throb of a Charles Meeks bass lines. The clarity of a Grant Geissman riff. The crackle of a James Bradley drum. The sensuality of a Chris Vadala reed. The sheer power of 70 people making music together.

Ask anyone who was there. It was truly an evening of magic.