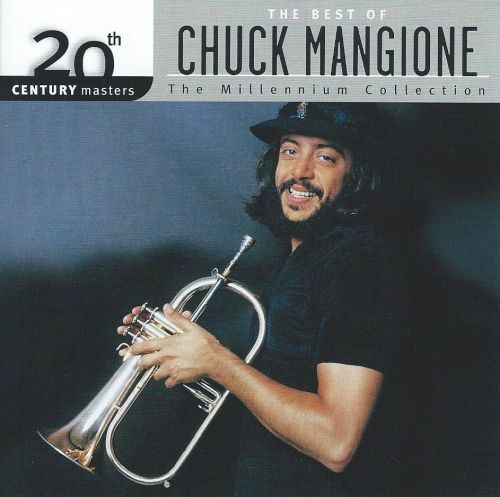 ​Chuck Mangione's massive success during the second half of the 1970's - exemplified by the ubiquitousness of his breezily melodic 1977 smash "Feels So Good" - was a phenomenon with little historic precedent.

Mangione's status as a respected veteran has had nearly two decades' worth of solid, often adventurous work under his belt before he hit the singles charts.

"Being born in 1940, I came into the world when jazz was the popular music of the day," Mangione states.  "So there was never any formula for me, except to record music that I was having a good time playing."

Growing up in Rochester, New York, Chuck was exposed to the music early in life thanks to his father, an avid music fan who would bring him and older brother Gap (later a noted pianist and bandleader in his own right) to local weekend jazz matinees.  There, they were exposed to some of the era's most influential players - many of whom would end-up retreating to the Mangione household for spaghetti dinners.

"I thought every kid had Dizzy Gillespie and Sarah Vaughan and Art Blakey coming to their house," Chuck recalls, "because it happened on such a regular basis at our place."

In 1958, while attending the prestigious Eastman School of Music, he and Gap recorded the first of three hard-bop oriented albums as the Jazz Brothers.  Four years later, Chuck released Recuerdo, his first LP as leader.

It was at Eastman that Chuck, who'd been playing trumpet and piano since childhood, first picked up the flügelhorn, following the example of trumpet genius Miles Davis, who'd been exploring the smoother, softer-toned instrument in his seminal collaborations with Gil Evans.  Flügelhorn would eventually become Mangione's main axe, but initially he didn't get much professional mileage out of the instrument.  "I fell in love with the sound and the feel of the flügelhorn, but there just wasn't much call for it at the time if you were a freelance player," he notes.

In the mid-'60's, Chuck did stints with the influential big bands of Woody Herman and Maynard Ferguson, as well as Art Blakey's Jazz Messengers.  He was recommended for the latter gig by Dizzy Gillespie, who reminded Blakey of the precocious kid he'd met in Rochester.

Mangione struck out on his own in 1968, forming a new Quartet (including esteemed saxophonist Gerry Niewood) as a vehicle for the composing skills he'd been honing since his teens.  "I wanted to see if I could fly on my own, and have a band to play the music I composed," he explains, adding, "That's when it started to take on a different direction."

The five albums Mangione recorded for the Mercury label between 1970 and 1973 - beginning with the innovative Friends And Love...A Chuck Mangione Concert, which found the artist conducting the Rochester Philharmonic Orchestra - stretched the boundaries of contemporary jazz presentation, incorporating orchestras, vocalists and extended multi-sectioned suites.  During that period, such distinctive numbers as "Hill Where The Lord Hides" and "Land Of Make Believe" won Mangione substantial FM airplay.  The latter tune, featuring singer Esther Satterfield, was particularly significant in winning Mangione an avid cult following outside of the jazz scene.

But it wasn't until he moved to A&M - a label co-founded by another hitmaking horn player, Herb Alpert - in the mid-'70's that Chuck Mangione became a full-fledged pop star.  Albums like Bellavia, Chase The Clouds Away and Main Squeeze introduced a smoother, more concise approach, setting the stage for the mainstream breakthrough on 1977's Feels So Good.  Its title track stormed the airwaves and has remained an easy-listening anthem ever since.

"With Feels So Good, I went into the studio with a brand new band and recorded six songs," Mangione recalls.  "I gave the tape to A&M, and I remember them telling me it was a nice album but there weren't any singles on it.  Barry Korkin got 'Feels So Good' down from nine minutes to three minutes and 27 seconds, and it took off from there and went completely nuts.  I think that we were in the right place at the right time with 'Feels So Good.'  The disco thing had so saturated radio, and program directors were looking for something else to play between Bee Gees songs."

Mangione's new crossover success won him an entirely new audience beyond the jazz community, and his new fans seemed to respond as much to his ebullient personality and accessible presentation as they did to the music.  He cites old pal Dizzy Gillespie as a role model in that regard.

"I had seen so many jazz performers who'd get up on the bandstand and just play," he says.  "But Dizzy had a way of inviting people in.  He was playing some pretty complicated be bop, but a whole lot of people were enjoying it because of the way he presented it.  There was a joy in his presentation and his personality that made people more apt to want to enjoy what he was doing."

A sellout stand at the Hollywood Bowl teamed Mangione and his combo with a 70-piece orchestra, and the event was immortalized on An Evening Of Magic - Chuck Mangione Live At The Hollywood Bowl.  Its set list spanned Mangione's career, including the rendition of "Hill Where The Lord Hides" that appears on this collection.

Rather than focusing on a "commercial" follow-up to "Feels So Good," Mangione took on the task of creating the soundtrack for director Hall Bartlett's 1978 film Children Of Sanchez.  "Once I had something that had sold two million, everybody was looking for something that sounded like 'Feels So Good'," Mangione recalls.  "I went in and recorded Children Of Sanchez, which was about as much of a left turn as you could make.  From an economic point of view, it might not have been the wisest move, but I was just following my musical instincts and trying to find the next challenge."

Mangione recorded three more albums for A&M, 70 Miles Young, Fun And Games and Tarantella, before moving to Columbia in the early '80's.  Although "Feels So Good" was his biggest hit to date, he has continued to record and tour successfully, maintaining a large and loyal audience that has stuck with him through thick and thin.  Meanwhile, his status as a pop-culture icon is underlined by his recurring presence on the animated TV sitcom King Of The Hill.

His cartoon exploits aside, the four-and-a-half-decade survivor prides himself on staying true to his musical instincts.  "When people ask me if I'm a pop musician or a jazz musician," he says, "I just tell them that I play Chuck Mangione music."