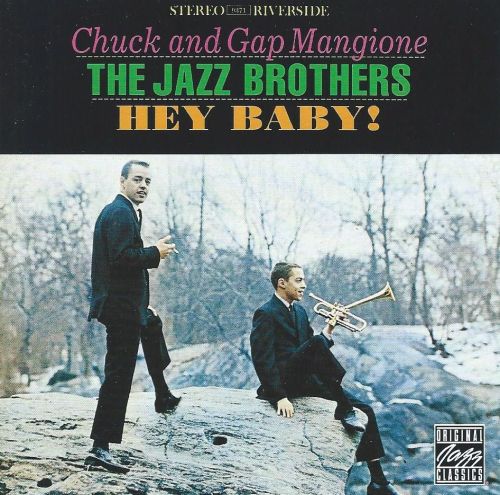 Because I conduct a jazz deejay show, I guess I receive just about every new album that comes out, and it's gotten to the point where just about half of these albums contain the word "soul," either in the title or in the descriptive writing that attends them. As a result, I have developed a violent aversion to this over-used and much abused noun. Why do I mention this fact? Well, I made it known to the powers at Riverside that it would be my great pleasure to utter a few well-chosen words about The Jazz Brothers, whose music I find so genuinely stimulating, providing I didn't have to use "that" word. (Producer's Note: Request was immediately granted. We're not unwilling to have the word omitted, just as long as it's clearly implied - as it is in this case - that these musicians have got it in the very best sense of that word that can't be used here. - O.K.)

I first had the pleasure of meeting these young men, and hearing them play, at the 1960 Randalls Island Jazz Festival in New York City; as a matter of fact, it was one of the more pleasant aspects of my job, as master of ceremonies, to introduce The Jazz Brothers to a New York audience for the first and second times.  I put it that way because that night, in totally unprecedented manner, the Mangione brothers' group, which opened the show, was brought back to the bandstand later in the program to satisfy the shouts of the clamoring audience.  That night I was impressed with the youth of the band, and now, two albums and almost a year later, I am even more than overwhelmed by the extremely high level of professionalism that these young men have attained...and retained.

I'd rather not dwell at great length on the biographic history of The Jazz Brothers, because their background was covered very adequately in the liner notes of their initial Riverside album, and possibly for the more important reason that the music contained herein is much more worth of our attention than the statistics.  Briefly, then, let us look at the members of the band.  From Rochester, N.Y., the Mangione brothers, co-leaders: Gap, twenty-two year old piano-playing brother, whose playing and writing have been such a vital factor in the success of the group; and Chuck, just turned twenty, who plays so much trumpet and contributes much of the original material in the Brother's book (including the title tune of this album).  Tenorman Sal Nistico, from nearby Syracuse, N.Y., and also barely out of his 'teens, has a style so swingingly buoyant that it seems to say, "Now, listen to this!"...and Sal is much at home on a ballad as he is at tempo, witness his effort on Old Folks.   Bassist Steve Davis has been heard with John Coltrane and with the James Moody band, two associations that have made him familiar to nearly all who follow current jazz (right now, he's trying as hard as possible to make it with Moody and the Mangiones).  The ease with which Steve ran down this Jazz Brothers book, relatively unfamiliar to him is a tribute to his musicianship.  Roy McCurdy, in his very early twenties, and like the Mangiones, a product of Rochester, never ceases to amaze me, because he is blessed with good taste, a commodity that is rare among young musicians today, especially young drummers.  When Roy plays down, you almost have to listen to him, his playing being felt rather than heard, and when he cooks he does so with an urgency.  This flexibility is a priceless asset, and is characteristic of the sound that The Jazz Brothers generate.

Music, especially jazz, is a very personal thing, and so I won't presume to tell you what I think is good, bad, excellent, or whatever on this album.  Decide for yourself...that's the privilege that comes with the purchase price.  I will say, however, that I'm very much in favor of this type of programming for an album:  some originals, a few standards, and all handled with sufficient originality to keep you listening and interested.  Maybe I'm old-fashioned, but I'm afraid that I find myself tiring of the "head" arrangement, muti-chorus recording dates.  I long for more ensemble sound.  The Jazz Brothers obviously feel as I do about a band playing together in that way, because their arrangements maintain a nice balance between solo blowing and developed ensembles.  You don't have to listen long to realize that The Jazz Brothers had fun making this album, and I'm telling you that you'll have fun listening to it.