The Boys From Rochester 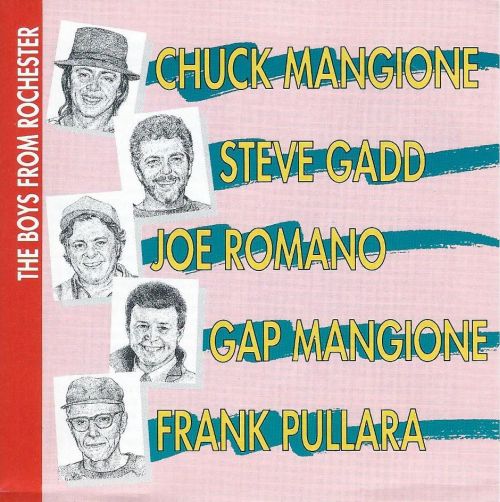 ​What goes around, comes around - only better than ever.

Long before Chuck Mangione made the world "Feel So Good", before Steve Gadd became EVERYBODY'S favorite session drummer, before Chuck's piano-playing brother, Gap, made his series of A&M albums in the 70's, or before saxophonist Joe Romano and bassist Frank Pullara developed stellar reps in several big and small
bands, they were "The Boys from Rochester".

It was the mid-sixties and though it wasn't Chuck Mangione's first band, it was one of the first, and it helped spread the reputations of all five members through the region.

A few months ago. in the wake of enthusiasm for Chuck and Gap's reunion of their other early band, The Jazz Brothers, Chuck got The Boys together.

"This performance by The Boys from Rochester was an event that just happened," Chuck says.  "Everybody was in town so we said, 'Lets get together.'  We didn't plan to record it.  It was a chance to get together five people who made music together a long time ago and who happened to be living in the same place.

"So, they performed with vigor and joy before a few hundred fortunate invitees at The Lodge at Woodcliff, a classy Rochester venue and what you're hearing is the result.  Despite Chuck's original plan, a recording was made, only for personal use.  But when the music vibes were so strong, and the recording was fortunately also fine, the feeling was - let's release it.

Purists will like and admire the fact that this eventful live session was recorded directly to a two track recorder - which means it couldn't be mixed (or sweetened) after the fact.  What you're hearing here is what we who were fortunate enough to be in the room heard that special night.

"I think you can lose the essence of what's going on if you get too sophisticated," Chuck says.  "The groove can go right out the window if you mess with it too much."

For repertoire, The Boys also went back to the roots, largely playing jazz and ballad standards like "Oleo", "Autumn Leaves", "The Anniversary Waltz", Dizzy Gillespie's "Here 'tis", and "Here's that Rainy Day".  If you're looking for the more familiar and very popular compositions of Chuck Mangione, this ain't the place.  (They can be found, however, in up-to-the-minute live digital versions on "Live at the Village Gate", also on the Feels So Good label.)

Early Mangione compositions are in evidence, however, making this a collectible for Chuck's fans.  The Boys From Rochester perform his very first composition, "Struttin' with Sandra", which was written for a high-school sweetheart; and "Between Races", a tune that Chuck says was inspired by trips to local race tracks that Joe Romano and he used to take when they'd skip out of music classes they taught in Upstate New York schools.

Finally - and foremost - "The Boys from Rochester" is about fresh, invigorating, playful and highly musical jazz performances.

Listen, for example, to the way Chuck builds his flugelhorn solo, and the texture of the whole tune, in "Autumn Leaves" or the way he thanks his mentor, Dizzy Gillespie, with a soft, tantalizing musical kiss in his gentle, swinging solo in "Here 'tis".

Or how about the versatility of Joe Romano, who nearly blows the ceiling off the bandstand on "Oleo" and "High Heel Sneakers", but who displays a remarkable sensitivity as a balladeer on "Here's that Rainy Day"?  It isn't every saxophonist who can make his own statement, but also generate echoes of Trane and Dexter Gordon in the same set.

And though I've enjoyed the piano-playing of Gap Mangione for several years, his ability with a blues riff in "High Heel Sneakers" and "Here 'tis", his sense of harmonics and dynamics in "Here's that Rainy Day", his supportive comping, and his inventive solos are still most impressive.

And how 'bout that rhythm section.  Frank Pullara is a bassist of impeccable timing yet notably melodic and is always wonderfully supportive.  Listen to his lovely musical dance with Chuck on the lyrical reading of "Anniversary Waltz" or his graceful support of Joe Romano in "Here's that Rainy Day".

And Steve Gadd is, of course, Steve Gadd.  Singer Sheena Easton told me once that the boys in her band refer to him as "Steve God".  From Paul Simon to Charles Mingus, from Paul McCartney to Frank Sinatra, Steve Gadd has left his mark on the world recording scene.

Here he's alternately restrained and explosive, and always remarkably creative.  He's guaranteed to generate the desired rhythm, be it rock-steady or free-swingin'.

Throughout the two sets, Chuck Mangione plays with inspired feeling and great taste.  While much of his contemporary musical output puts the spotlight on his skills as a composer and arranger, "The Boys from Rochester" is a chance to enjoy Chuck Mangione, the player.  And he's seldom - if ever - sounded better.

"The Boys from Rochester" is the second album on Chuck's own Feel's So Good label, and catches the artist at a point in his career when he's charting new territory for himself.  And he's discovered that artists sometimes find their future by checking out their past.

"Sometimes, breaking new ground is looking back to where you were," Chuck says.  "And as a result, I'm looking at today as a positive time, and I'm going to let what happens next happen naturally."