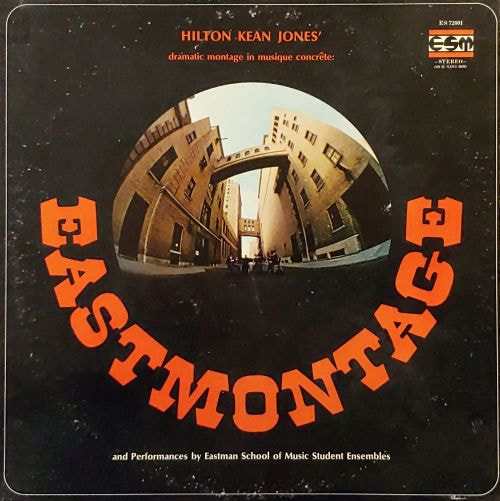 Eastmontage
​All recordings are performed by Eastman School of Music Student Ensembles.
This record was made at Eastman while Chuck Mangione was a faculty member.

* He wrote Boy With Toys and is the director of the Eastman Jazz Ensemble on this recording (April 11, 1969).

​Since you spent some of the most important years of your life at the Eastman School of Music, you will have a special appreciation for many of the sounds included in Hilton Jones' composition which was written especially for this recording. These are the sounds of Eastman today: sounds of busy, talented music students and dedicated teachers. The short performances by several of our outstanding student ensembles are sound evidence that the traditional excellence identified with Eastman performers for nearly half a century is alive and well . . . and living in Rochester.

Today's Eastman School student is a part of a strong tradition of excellence in every area of music education. He is selected from an impressive number of applicants drawn from all over America. He studies in an atmosphere of intense dedication to his art. His curriculum includes broad opportunities in the humanities in addition to applied music study and sound theoretical training. Among his teachers are artist performers and scholars internationally known for their contributions to the world of music.

Like every educational institution, Eastman is under-going change: new additions to the faculty and administrative staff, new efforts in the public relations and development areas, new and revised programs of instruction, new facilities for study and research, new opportunities for the study of contemporary music and the never-ending search for improvement of our curricula are some of these areas of change.

Through this recording, prepared especially for East-man School Alumni, we sincerely hope that a hit of the excitement of the School will help to convey our enthusiasm for the important task of educating the musician of tomorrow here at the Eastman School of Music.

Eastmontage has an overall form of a simple rondo (A B A' C A"). Among the A sections there is an internal form of an expanding nature (A:a; A':a,a'; A":a,a',a"). Sections B and C are both multisectional, additive forms. Material from B returns at the end of C. All A's, B, and C are distinguished by their exclusive timbres. B and C are slightly related through a common envelope.

This piece was composed at the Eastman School Electronic Music Studio. The studio features equipment by R. A. Moog, and its director is Dr. Wayne Barlow.

THE COMPOSERS AND PERFORMERS

HILTON KEAN JONES, an A.M.D. student at Eastman, and an organist, was a graduate assistant to Wayne Barlow in the Eastman Electronic Studio during the school year 1968-69. His work in electronic music dates to 1965, with the realization of a work at the University of California at Davis. Among his recent compositions is an electronic music tape for the "World from the Air" exhibition, commissioned by the Director of the George Eastman House, Beaumont Newhall.

Since September, 1969, Mr. Jones has been Assistant Professor of Music, in conventional and electronic composition and theory, at the University of South Florida in Tampa.

PETER MENNIN, an Eastman alumnus ('45, '45, '48), is President the Juilliard School of Music and one of the foremost contemporary American composers. Mr. Mennin's Canzona is played by what is certainly the world's foremost performing organization of its kind, the EASTMAN WIND ENSEMBLE. The Ensemble's reputation, established largely through a sizable series of recordings for Mercury under its founder, Frederick Fennell, continues to grow under its present conductor and music director, DONALD HUNSBERGER (ESM '54, '59, '63). It has recently made recordings for Decca and other major labels under Mr. Hunsberger's direction.

JOHANN STRAUSS' name cannot be found amongst the roles of Eastman alumni, but his fine fantasy about a flying mouse (but "bat" doesn't alliterate!) was given a splendid recreation in the Eastman School's Cutler Union in February, 1969, by the EASTMAN OPERA THEATRE, with direction by Leonard Treash, scenery by Thomas P. Struthers, chorus direction by Milford Fargo, and EDWIN Mc AR¬THUR conducting the cast and the Eastman School Symphony Orchestra. The solo voices heard here in the Champagne Song are those of Suzanne Troxell (Adele), Ann Yervanian (Orlofsky) and James Hawkins (Eisenstein).

CHUCK MANGIONE, ESM Class of '63, is director of the EASTMAN JAZZ ENSEMBLE and a jazz trumpeter of no mean fame, having played with great bands such as Maynard Ferguson's, Woody Herman's, Lionel Hampton's, Art Blakey's. Boys with Toys attests to his prowess as a jazz composer.

J. S. BACH never went to Eastman either—people who did go there know about him, though—but STEPHEN KELLEHER did, from 1958 to 1961. His transcription of the Contrapunctus XIV was played (and the present recording was made) at an Alumni Concert in the Eastman Theatre in 1969 by the EASTMAN TROMBONE CHOIR under the direction of the revered mentor of more trombone players than a slide can be shaken at, EMORY REMINGTON.

SERGE! RACHMANINOFF's Second Symphony excerpt, which closes the record, was taken from a live concert performance in the Eastman Theatre by the EASTMAN PHILHARMONIA under the baton of its musical director and conductor, WALTER HENDL, Director of the Eastman School. Words of Igor Stravinsky, published in the May 12, 1966 issue of The New York Review of Books (and later quoted by Time magazine), are a unique testimonial to the Philharmonia.

"Only a few weeks ago I heard the Eastman School orchestra play to perfection, on a minimum of rehearsal, some of my most difficult later music, including parts of The Flood, which at least one renowned professional orchestra could not manage alter a week of rehearsals and a dozen performances. the flexibility of the young versus the rigidity of the routiniers is an old theme, of course, but you can hardly imagine the pleasure this student orchestra gave me."