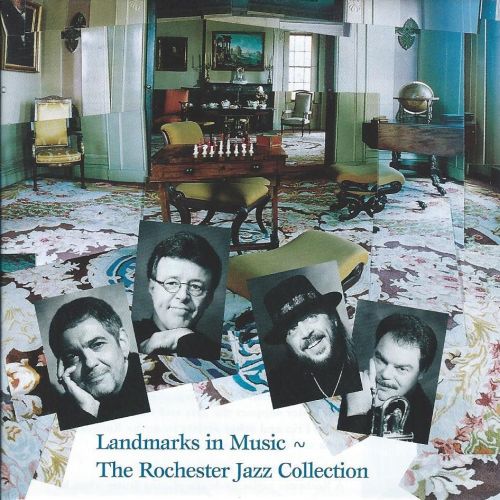 ​Celebrating Rochester's landmarks through music.  The music of Rochester's artists sores above the city's physical landmarks and is as enduring as the buildings that inspired them.  Welcome to our unique collection of music performed by Rochesterians.  Some of the artists featured in this collection now live elsewhere, but they continue to call Rochester home.  Listen and enjoy Rochester's Landmarks in Music.

"Without question, 'Rochester' is by far the toughest word I've ever had to use in a lyric of mine."

Chuck Mangione defines love.  Love of music, family, and Rochester.  It is poetic justice that Bellavia, named to honor his mother, brought Chuck his first Grammy Award.  The son of an Italian-American grocer, Chuck was born in Rochester on November 29, 1940.  Locals remember the Jazz Brothers, a group formed by Chuck (trumpet) and his brother Gap (piano) before Chuck left home to play with Art Blakey and the Jazz Messengers.  He returned to the Flower City to accept the position of director of the Eastman School of Music's Jazz Ensemble.  Soon thereafter, however, Chuck would leave again to pursue his solo career in earnest and release an extraordinary series of original recordings including Chase The Clouds Away, Bellavia, The Children Of Sanchez, and Feels So Good.  Chuck is once again on tour delighting audiences around the world.

"For me, 'Rochester' and 'home' are equal concepts. It is a place of wonderful physical beauty; of culture, music and the arts; of education, discovery and invention; and of family and community. I am and have always been in love with Rochester and its people."

Gap Mangione, with his brother, Chuck, known to Rochesterians as the Jazz Brothers, set Rochester's music scene on fire in the early 1960s. Gap's inspired piano and keyboard was always the perfect counterpoint to his brother's passionate horn. Soon after his 1965 graduation from Syracuse University, Gap released his first solo album, Diana in the Autumn  Wind. More extraordinary albums followed - Sing Along junk  on Mercury and She and I, Gap Mangione!, Suite Lady, and Dancing on A&M Records. In all, Gap has released seven solo albums and has played on ten Chuck Mangione recordings. Gap's special interest is playing, composing and arranging for big bands. He has been wowing jazz club and concert audiences with his Gap Mangione Big Band. His latest release, Planet Gap, features his big band.