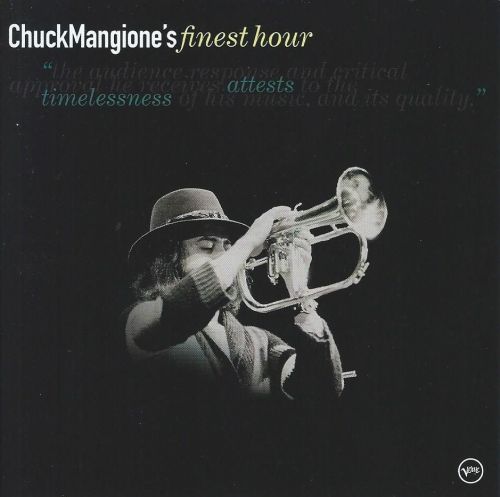 ​When it comes to entries on the Billboard pop singles charts, instrumentals are definitely in the minority. And when a track without vocals manages to climb all the way to the magazine's Top 10, it's almost always a pop or rock number, such as the Ventures' twangy-guitar tune "Walk Don't Run' (no. 2, 1960) or saxophonist Kenny G's syrupy "Songbird" (no. 4, 1987). A jazz-based record, such as the Chris Barber Jazz Band's version of Sidney Bechet's lyric opus "Petite Fleur" (no. 5, 1959), is certainly the exception.

This rarity makes Chuck Mangione's "Feels So Good", a contemporary jazz cut that rose to no. 4 on the Billboard chart in 1978, all the more special. Part jazz, part rock, "Feels So Good" was a breakthrough for Mangione, who began his career as a bebop-styled trumpeter and later reached a legion of fans with a series of tunes blending aspects of jazz and pop music. The album Feels So Good eventually sold more than two million copies and made him as much a household jazz name as Stan Getz or Dizzy Gillespie.

Mangione's early years were fruitful. In Rochester, New York, where he was born and grew up, he rubbed shoulders with many greats, including Gillespie, who came to the family house after local appearances for a home-cooked meal. A jam session often followed, and Mangione and his piano-playing brother, Gap, sometimes took part.
Later, while still in Rochester, Chuck and Gap led a band called the Jazz Brothers, which featured such future heavyweights as saxophonist Sal Nistico and drummer Roy McCurdy and which, from 1960 to 1962, made three first-rate albums for Riverside Records. During the same period, Mangione recorded his first album as a leader, Recuerdo, for Riverside's Jazzland subsidiary; he also studied at the prestigious Eastman School of Music, from which he earned his B.A. in 1963.

Mangione moved to New York City in 1965, where he played briefly with the big bands of Woody Herman and Maynard Ferguson before joining Art Blakey's Jazz Messengers. He was in the fabled drummer's band for two and a half years, where he worked alongside the soon-to-be-renowned pianist Keith Jarrett and made two albums, Buttercorn Lady and Hold On, I'm Comin', for Limelight.

Returning to Rochester in the late Sixties, Mangione formed a quartet that included saxophonist-flutist Gerry Niewood. He switched from trumpet to flugelhorn (as well as occasionally playing electric piano), and he also shifted his musical focus from the hard-driving jazz that typified the Jazz Brothers and the Jazz Messengers to more lyrical pieces that leaned toward pop music. Of these initial works, none drew more attention than "Land of Make Believe", recorded for Mercury in Toronto, on which Mangione's band was joined by vocalist Esther Satterfield and the Hamilton Philharmonic Orchestra. The album of the same name earned two Grammy nominations in 1975: one for best jazz performance by a big band, the other for best arrangement accompanying a vocalist.

That same year Mangione signed with A&M Records and began scoring with one solid-selling album after another. The first was Chase the Clouds Away, whose title track was used as background music for telecasts of the 1976 Olympic Games. The tune "Bellavia", from the album of the same name, earned Mangione a 1977 Grammy® for best instrumental composition.

This compilation comprises the essential works of Mangione's Mercury and A&M years. This is music that was exceptionally popular, but it is not superficial: It had, and has, substance and authenticity, due as much to Mangione's musical background as to his good taste.

"Feels So Good", recorded in 1977, sports exuberant playing from Mangione, saxophonist Chris Vadala, and guitarist Grant Geissman. "Chase the Clouds Away" has the kind of simple yet mellifluous theme that stays fresh with the passage of time. "Land of Make Believe" spotlights the vocal talents of Esther Satterfield.

"Bellavia" is yet another tender melody, while the waltz "Floating" showcases Mangione's skill on electric piano. "Main Squeeze" is one more example of his ability to craftily blend elements of jazz and rock. The climactic "Children of Sanchez", written for the soundtrack of a 1978 film that starred Anthony Quinn and Dolores Del Rio, features emotive vocals by Don Potter.

Chuck Mangione's career has had highs and lows since these recordings were made, but he has been active since the mid-Nineties, touring with a quartet that features his longtime partner Gerry Niewood. He still plays "Feels So Good" and "Children of Sanchez"; the audience response and critical approval he receives attest to the timelessness of his music, and to its quality.