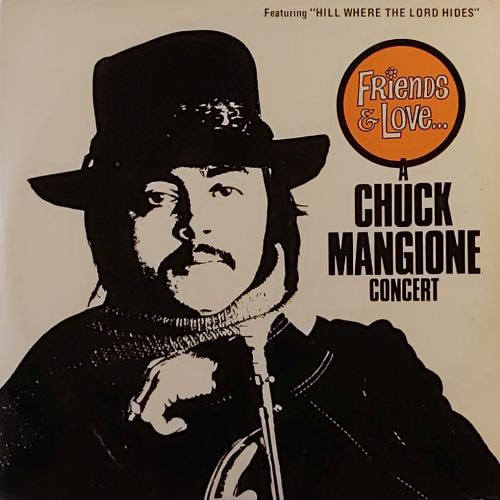 ​Chuck Mangione was invited to conduct a Rochester Philharmonic Orchestra in May of 1970, and was given full rein of the affair.  The result is contained in this album - a concert which Chuck composed for a full symphony orchestra and six superbly accomplished soloists, imaginatively staged with special visual effects, and performed before a standing-room-only crowd of over 3,500.  This concert was video-taped by WXXI in Rochester, New York, under grants from the Eastern Educational Television Network, the Corporation for Public Broadcasting and the R.T. French Co.

Mangione's music is strongly rooted in the jazz idiom, but he is reluctant to categorize his compositions: " 'Friends & Love' was a gathering of musicians from a variety of backgrounds, each one of whom contributed to the whole.  When the music is honest and full of love, labels aren't important and people will listen with an open mind".​
Below is an interview with Don Potter speaking about the song "Hill Where the Lord Hides".
Transcript of the audio interview

The actual show “Friends and Love” was invented. Literally invented, you know, Charlie wanted to do a show and he wanted to do a big deal. He wanted to have a second half of the show would be a big extravaganza and he said let's get Stanley Watson, Bat McGrath and myself and Chuck and we'd all gotten together in the farmhouse that Bat and I had rented at the time, and we buried ourselves for a week out there and we started putting together the “Friends and Love” concert. And we did.

Don remembers putting together the song “Hill Where the Lord Hides” in particular.

It was a melody that he initially started out as real slow. A real ballad and I'm an acoustic guitar player, basically a rhythm guitar player and being unable to play real real slow on the acoustic just from I always wanted to bang it out and have a lot of energy. He kept trying to encourage me to play it slow and I kept rushing and running ahead and going crazy to finally get settled into this kind of a more up groove, it really had a more up groove to it.

So I realized that the groove that we were starting to create on it was really happening and he really loved it.

So he orchestrated it, It is to say and a marvelous job and he said, how are we going to start this?

And I said, man, I got it perfect Charlie. I got the idea man. Here's what you gotta do you gotta walk out on the stage in front of the curtain man. And you got to play the melody in front.

No, no, he says I can't do that. I said you got to do it and had the curtain closed.

You orchestral was behind the curtain, you finished the melody. I'll start playing the guitar and I'll set the time.

The curtain can rise. You can waste 20 minutes if you want to. I'll be settin’ the groove and then when you want to, you can raise your arms and bring the orchestra in.

That way you don't have to make this be uncomfortable, long period waiting, he said, man, I don't know if I can stand out in front of the audience, you know, in front of the curtain like that and do this. Don't worry, it'll be, it'll be perfect.

So we've rehearsed this tune, and this is a very weird story. We rehearsed the tune with the orchestra and they've heard me playing the rhythm guitar and stuff like that so they know where they're supposed to come in.

So meanwhile for some reason there was that old failure to communicate. Everything is so heavy and then everybody is frightened and all this kind of business. Everybody forgot to tell the orchestra he was going to walk out in front on stage and play this thing with a flugelhorn with the stage where the curtain closed and when the show started they're waiting for the curtain to rise. The orchestra sitting there. I'm sitting there with them and I can hear them buzzing with each other and what's going on man, what's happening? Chuck starts playing out front and they're looking like, oh my God, we busted the curtain we get their curtains down we're supposed to be on and then.

The orchestra’s starting to look around and they're getting a little frantic, getting weird.

And then, before they know it, I start playing rhythm guitar, hammering away back there, and the string section is really starting to panic.

It's like oh man, this is really going to be a mess when nobody knows what's happening. And up comes the curtain and they start looking at each other like this must be the way it's supposed to go man and Howard Weiss is the head man over there at, in the concert the concertmaster. He got it together. He realized what was happening, man, he puts his sheet music on he looks at them all he said, follow me.