Dixieland at the Roundtable 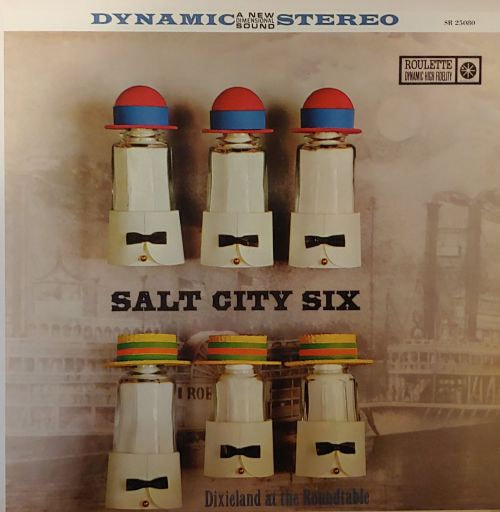 ​​This Salt City Six outfit differs from other "Dixieland revivalist" groups in one major aspect they are more musical They are not concentrating on an attempt to bring back a style of playing that was inherent during a past era.

They do play jazz standards that were popular tunes in that past era, but in their interpretations are found fresh ideas and even a modern phrase here and there and this is all accomplished with a swinging rendition.

The lads in this combo are all young and enjoy what they are playing. This tends to give the closely knit group an overall aura of excitement. This can be felt by the listener in their ensemble work as well as in the individual solos. I have seen Syracuse University students in the Memory Lane club up in Syracuse, N. Y. rise from their tables and even stand on chairs to applaud the Six after an especially exciting performance.

The current Salt City Six has slowly evolved from an earlier band known as Will Alger's Salt City Five working out of Syracuse where now dry salt mines once gave the city its sobriquet of "Salt City." Both the old band and the new group have wandered afar, while keeping Syracuse as a base. They have been a familiar attraction at the Blue Note in Chicago, the Stardust Hotel in Las Vegas, the Brass Rail in Milwaukee, Dream Bar in Miami Beach, Crest Lounge in Detroit, The Bayou in Washington, D. C. and the Roundtable in New York City.

One of the outstanding and most promising instrumentalists in the band is 24-year-old Nick Palumbo who plays clarinet. A native of Scranton, Pennsylvania, Nick attended Syracuse University and is a graduate of the School of Music. He began his musical career on the West Coast with a kid band known as Ken Murray's Musical Minors. They were a sensation on television shows in both Hollywood and Las Vegas. Nick had somehow landed in Toronto, Canada, where he was connected with an unemployed bop band when he was discovered by Will Alger's Salt City Five then playing the Colonial Tavern. The boys knew clarinetist Jack Maheu was planning to leave the Five to join the Dukes of Dixieland and they advised Nick to make his way back to Syracuse where he had started from a year or so before. Nick managed to show on the scene when Jack left and was hired by Alger. He is the only member of the old Five with the present personnel and consequently inherited the mantel of nominal leader when Will Alger decided to get off the road. Palumbo is a facile soloist and plays well-conceived improvisations, ranging from New Orleans-styled phrases in the medium and low register to original modern ideas within the entire scope of the instrument. Although he solos on all the sides, you'll find his work exceptionally satisfying on "SATANIC BLUES," "CIRIBIRIBIN" and on Jelly Roll Morton's "WOLVERINE BLUES."

The lead horn in the driving ensemble and a star soloist in the band is Bill Andrews, a 26-year-old Bostonian. Bill has studied extensively at the Boston Conservatory of Music. He loves Dixieland music and plays a lyrical trumpet in the tradition of Bix Beiderbecke and Red Nichols. When the opportunity to join the Salt City gang came along he didn't hesitate in spite of his musical studies at the Conservatory and a well established Dixieland group of his own known as the Dukes of Dixie which he had led on jobs throughout New England for several years.

Bill's trumpet is unusually effective on "WOLVERINE BLUES," "I'M COMING VIRGINIA" and on Hoagy Carmichael's lesser known melody, "NEW ORLEANS." There is a bell ringing clearness and a swinging drive to the Andrews horn.

The trombone chair, formerly held by ex leader, Alger, has been taken over by a comparatively experienced big band trombonist, Bill Bartell, 25 years old, has worked in the name bands led by the late Hal McIntyre and Dean Hudson. The latter leader has led a popular hand around the South. ern college circuit for years.

Bartell plays long solos on "NEW ORLEANS," "INDIANA" and on Meredith Willson's "76 TROMBONES" from 'The Music Man.' As well as melodic solos, Bartell is given to occasionally using his horn as a percussive instrument in ensembles and now and then playing a short glissando phrase. Gaspare 'Gap' Mangione is a pianist whose playing is more in the modern mode than in a Dixieland vein but this band is used to the style.

Mangione is originally from Rochester, N. Y., and met the boys in Syracuse while attending Syracuse University. He is 21 and in spite of his modern thinking enjoys playing with the Six. His best solo on this set is on "INDIANA (Back Home Again In Indiana)," the melodic line of which has always attracted the progressive musicians.

Hogan is a native of Syracuse and is 24 years old. He attended Syracuse University School of Music and also got acquainted with the boys when they were playing locally.

The drummer in the band, Charles Cameron, is a 27-year-old professional musician from Rochester and a veteran of a famed Rochester Dixieland band known as The Dixieland Ramblers. They played for many years regularly at the Golden Grill under the leadership of Max McCarthy.

While Nick Palumbo ostensibly leads the band and announces their numbers, the real leader is Charley, who besides holding the group together musically has taken upon himself the many business details of the group.

Cameron's drums are usually the last instrument heard on a rendition. He sometimes taps his cymbal to sort of put a period at the end of a number, or he will bang the cymbal to give a fading out sound to the ending. In this set he plays a short drum solo on J. Russell Robinson's tune, "SATANIC BLUES" and a longer one on "WOLVERINE BLUES." The tunes presented here by the Six are not the usual run of Dixieland standards. The band is noted for working out Dixie arrangements on melodies that appeal to them. Included here are probably the only recorded Dixieland versions of "CIRIBIRIBIN" and "VOLARE."

During the recording date there was enough humor all around to keep everyone in a festive mood. Some of it came from Roulette's experienced jazz recorder and Count Basie's favorite A & R man), Teddy Reig. Most of these sides were waxed 1-2-3 with one take. The boys have their arrangements down pat.

When it was decided to take a second take on "VOLARE," Reig called out from the control booth, "O.K., get in your gondolas and put Bud Powell (meaning the piano player) in front and let's go."

It is hoped these recordings will bring as much pleasure to the listeners as the Salt City Six' playing has given to the many college and nightclub audiences they have pleased over the years.