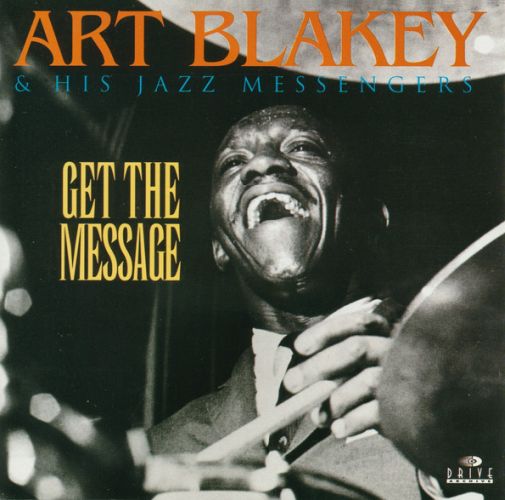 There have been very few talent scouts in the history of jazz on the level of drummer Art Blakey; only bandleader Fletcher Henderson and Miles Davis come to mind. From the time he first started regularly leading a group in 1954 (which soon became known as the Jazz Messengers) up until his death in 1990, Blakey hired and helped to discover scores of young jazzmen including virtually every major trumpeter that emerged during this long period; Clifford Brown, Donald Byrd, Bill Hardman, Lee Morgan, Freddie Hubbard, Woody Shaw, Valeri Ponomarev, Wynton Marsalis, Wallace Roney, Terence Blanchard, Philip Harper, Brian Lynch and even Chuck Mangione!

Get the Message features a rather unique version of the Jazz Messengers for, in addition to the drummer-leader, the quintet includes Mangione, the obscure tenor-saxophonist Frank Mitchell, bassist Reggie Workman and a young pianist named Keith Jarrett! But by the time of these Jan. 1-9, 1966 recordings, Blakey had been a major force as a drummer, bandleader and an informal teacher for so long that it was already being taken for granted that the best young musicians were to be found in his group.

Born in Pittsburgh, Pennsylvania on Oct. 11, 1919, Art Blakey was originally a pianist (at least until he heard Errol Garner play) but by 1942 (when he joined Mary Lou Williams' group) Blakey was an up-and-coming drummer. His most important sideman association was playing with Billy Eckstine's revolutionary bebop big band during 1944-47. Blakey's exciting drum rolls and explosive accents propelled Eckstine's orchestra and soon Art was thought of as one of the big three of bop drummers along with Kenny Clarke and Max Roach.

Although Blakey led a record session in 1947 and briefly headed a rehearsal band that he called the Seventeen Messengers, he primarily worked and recorded as a sideman (most notably with Charlie Parker, Thelonious Monk and Miles Davis) up until 1954. After taking a quintet with pianist Horace Silver, Clifford Brown and altoist Lou Donaldson to Birdland, Blakey and Silver joined forces to co-lead the original version of the Jazz Messengers. When Silver went out on his own in 1956 the drummer quickly organized a new version of the group. Art Blakey's basic idea was to encourage his sidemen to write new music (since he did not want the Messengers to sound like a loose jam session with the same old songs), play at their maximum creativity at all times and develop their own styles. Although always open to the ideas of his younger musicians, Blakey was able to forge a consistent identity for his pacesetting hard bop group despite many personnel changes throughout the years. The many graduates of Art Blakey's school of swinging today form a virtual who's who of jazz, all talented players who were greatly influenced by the drummers music philosophy.

Among them are certainly Chuck Mangione and Keith Jarrett. At the time of this recording, Mangione was 25 and considered a promising bop-orientated trumpeter. In the early 1970s he would have some major best-sellers in the pop world (most notably "Feels So Good" and "Land of Make Believe") before gradually drifting into semi-retirement. However Mangione's playing throughout this live session is in the best tradition of Lee Morgan and Freddie Hubbard. Fate was apparently not so kind to Frank Mitchell a long forgotten tenor player whose style was clearly influenced by John Coltrane. Other than appearing on a somewhat commercial album with Blakey a few months later and Lee Morgan's The Sixth Sense in 1967, little has been heard of Mitchell since, despite his obvious talent.

Keith Jarrett was at the beginning of his career when he joined Blakey. Just 20 at the time, the pianist would later that year gain fame as a key member of Charles Lloyd's very popular quartet. His freely improvised solo concerts in the 1970s made Jarrett into a household name in the jazz world and he has since conducted a busy schedule as a leader of his own explorative groups, a solo pianist and much recorded artist for ECM.

Actually, in 1966 bassist Reggie Workman was the most famous of Art Blakey's current sidemen due to his work with John Coltrane in 1961. Workman was previously with Blakey during 1962-64 and has remained a potent force in the jazz scene up to the present day, constantly in demand for his ability to play with originality and drive in settings ranging from bop to the avant-garde.

Get the Message was recorded live at the legendary Lighthouse in Hermosa Beach, California. The program has plenty of variety starting out with the happy "Buttercorn Lady", a brief calypso piece. "Recuerdo" contains some of the most adventurous playing of the date. Mangione's warm tone contrasts well with Mitchell's harder sound while Jarrett (who strums a bit from inside the piano) and Blakey (who keeps the original rhythm going throughout) take solo honors. The first half of the program finishes with the Messengers playing a spirited version of "The Theme", the traditional set closer.

"Between Races" is a hard charging piece offering some explosive Blakey fireworks. The standard "My Romance" serves as a feature for Chuck Mangione's muted trumpet which was already quite distinctive at this early stage. The date finishes off with a cooking version of "Secret Love" which has fine solos all around; Jarrett's improvisation is particularly unpredictable but never stops swinging.

Art Blakey must have enjoyed this session!
- Scott Yanow