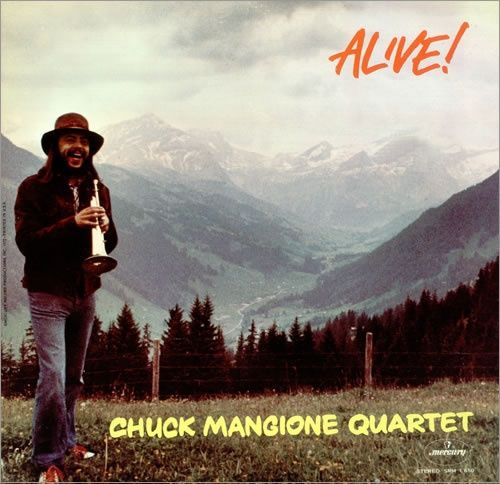 ​(Alive! was recorded by the Chuck Mangione Quartet performing for flood relief August 1972 at the Arts Center on the Nazareth College campus, Rochester, New York.)

"The music is the result of an experience which began in June at the Montreaux Jazz Festival in Switzerland and really blossomed during our three week stay at Ronnie Scott's in London."

"Just being invited to perform at the prestigious Montreaux Festival had everyone in the Quartet excited, and since none of us had ever been to Europe, the trip iteself has all of us freaked out!"

"Switzerland was breath-taking!  The mountains are so magnificent they humble you and yet there's a feeling of energy from everything around you."

"There was no possible way we could have been prepared for the reception the music received.  We had traveled thousands of miles to perform one hour for a foreign audience that had no idea who the hell we were.  The reaction was fantastic!  They were beautiful!  Their rhythmic applause demanded encores, and there even were immediate invitations to other European festivals.  The positive comments from the other musicians had me dazed - but I really flipped when Claude Nobs, the Montreauz Festival Director, said that for a group with no previous appearance or record release on the Continent this reaction was unprecedented in the Festival's history."

"As we prepared to leave for London - to have imagined anything more than the Montreaux experience would have been insane.  Yet, looking back - this was only the beginning."

"Our stay at Ronnie Scott's was a whole 'nother thing.  Performing in one of the world's great music rooms six nights a week for three weeks - opposite jazz violinist Stephanne Grappelli - didn't leave much to be desired.  In a way, every night presented the same challenge Montreaux did because each set we were introducing our music to a new audience.  And again the reaction was unbelievable."

"As the nights went by the band really began to feel at home, and the music felt good.  The only negative moments were the reports about the floods back home.  It was unreal.  Being so far away was a helpless feeling."

"As the end of the gig at Ronnie Scott's approached there was something special happening with the music.  It really felt alive.  This was music I wanted to share with all my friends."