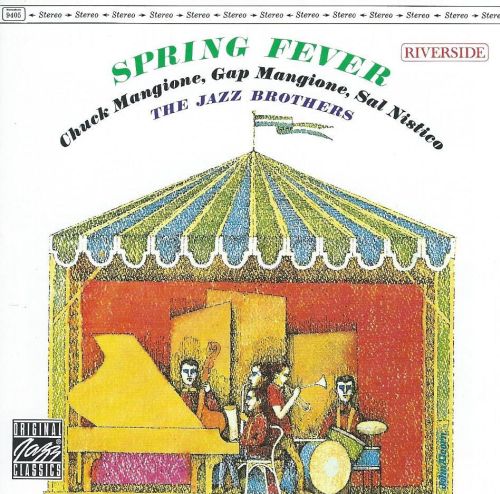 Brothers in jazz seems to be a Riverside specialty. If this label had a coat of arms, it might well be two crossed horns on a field of cornering sports cars, and under that banner you'd find albums featuring many fraternal combinations: the Adderleys, Cannonball and Nat; the Montgomerys, Wes, Buddy and Monk; the Heaths, Jimmy, Percy and Al and the Mangiones, Chuck and Gap. But while all are brothers in jazz, only the Mangiones are The Jazz Brothers.

That name of course extends beyond the two actual relatives to include all the members of this close-knit quintet. Sal Nestico has been a "Brother" since before their 1960 recording debut; and in this, the groups third album for Riverside, two new members, on bass and drums, have joined the fraternity.

The changes in the rhythm section are not all that is "new" here. There is also, I think, a further step towards increasing musical maturity. Experience is what young players need most, and often find hardest to obtain. For the usual process of individual "scuffling" for jobs with one pick-up group or another is a decidedly erratic, hit-or-miss affair, not calculated to promote steady progress. But The Jazz Brothers, although they have (like most young musicians) discovered that it is not easy to find those elusive club bookings as often or as regularly as one would like to, have managed to stick together. The tangible results of mutual playing experience are evident on the present album in tighter ensembles and more confident soloing. The spirit of youth that distinguishes the group (all of them 24 or younger at the time of this recording) has not diminished at all; it is just framed more and more professionally as time goes by.

(With the scarcity of big bands, once the natural "school" in which young players gained their earliest experience, the small band has become the nursery as well as the college. For example, young as they are, the Jazz Brothers boast at least one graduate the smooth Roy McCurdy, considered by some to be the best drummer for the Jazztet that Art Farmer and Benny Golson have had, is an alumnus of the group.)

As for the personnel, pipe-smoking pianist Gap is the oldest, although not scheduled to be 24 until the Summer of 1962. His solos have thought and order, but that doesn't at all mean that he forgets to swing. Brother Chuck is now 21. Until recently he played an upswept Dizzy Gillespie-model horn a gift from Diz himself, who does not make such gestures lightly. His switch to conventional horn has apparently done nothing to alter the passion and vigor with which he delivers an assortment of modern trumpet sounds. In his playing there is much conviction for one so young.

Tenorman Nestico, although only one year older that Chuck, has more playing experience under his belt than the others. A native of Syracuse NY, he started at an early age and was on the road with rhythm and blues outfits before The Jazz Brothers got together. He plays hot and hard, with a soaring attack that shows links to todays tenor titans but also speaks with a voice of its own.

Of the two new members of the group, Frank Pullara is the older. A 24-year-old and (like the Mangiones) a native of Rochester NY, he taught himself to play bass at the age of 17. Frank also plays several other instruments, has studied at the Eastman School of Music in Rochester, and has worked with Kai Winding, Carl Fontana and Frank Strazzeri. Since joining The Jazz Brothers Pullara has done much of the composing and arranging for the group; two examples of his writing are included here. Drummer Vinnie Ruggieri, whose taste and poise beile his years, was born in Brooklyn in 1941. Originally self-taught, he began playing at 15, has worked with Kenny Drew and J.R. Monterose, is currently dividing his time between the Brothers and Slide Hamptons band, and particularly digs the playing of Philly Joe Jones.

The mode of expression for The Jazz Brothers is a modern, hard-swinging one, tempered by softer (but no less swinging) performances. The former vein is exemplified by Chuck Mangiones Brooks Brothers (a punning reference to an up-state New York disc jockey) and Spring Fever, and by Frank Pullaras Not Too Serious. The quietest moments are found on the celebrated standard ballad, What's New?, which contains a long, expressive Nestico solo, sandwiched by some sensitive muted work by Chuck.

Not as quiet, but gaining much of the impact by the quiet way in which it does its cooking, is an extended Softly, as in a Morning Sunrise, again showing off a muted Chuck and featuring a building solo by Gap as well as a convincing Nestico stint and an impressive plucked bit by Pullara. Somewhere in between is Pullaras First Waltz, in which I find some echoes of the mood of Randy Westons Little Niles, but which definitely has its own haunting personality.

Two things you can be sure of from these Jazz Brothers are enthusiasm and sincerity. If their playing reflects those older musicians who have influenced them, this is no more than a natural, healthy sign that they are genuinely involved with what they really feel is the best in modern jazz. This is one case of "Spring Fever" that needs no sulphur and molasses.
- IRA GITLER
Spring Fever reminds us that there have always been jazz brothers, jazz youth, and vital regional jazz centers. Chuck and Gap Mangione, on trumpet and piano respectively, were promising siblings at the time of this 1961 recording; and their Jazz Brothers quintet, featuring future Woody Herman star Sal Nestico on tenor, was a precocious unit drawn primarily from the Upstate New York area. This band was strong in all chairs (note, for instance, the muscular bass lines and effective compositions of Frank Pullara), and represents a vivid snapshot of where the hard-bop idiom was at in the early Sixties.

(The above paragraph appears on the back of the CD cover, but does not form part of the original liner notes)